Changing times and changing "me" have brought me to interesting place in respect to Personality Type.

I've found myself wanting to avoid gatherings of MBTI & Type enthusiasts for fear I'll be upset by the general tenor of the "type talk." Recently I've sensed increasing inner irritation whenever someone makes an observation based on one of the eight type letters or uses it to "type" the personality of another person. Often these comments are well meaning as in "We really need to make this organization more welcoming for "S's" or "We have to make sure "I's" feel comfortable in this setting." Yet good intentions seem not to calm that inner tension - nor does it make any difference that I may personally "like" the person committing what has become in my personal book a "sin of stereotyping."

Attending APT 14 helped put some structure to what has been evolving at a less conscious or non-verbal level. It clarified and gave me some language to express it. Both the inspiring opening session with Harold Grant and the terrific closing Plenary Session (with a panel of 9 revered Type Experts) provided lyrics for the melodies that have been playing in my head.

Dr. Grant, in a back to the future presentation, began with a historical view to explain the complimentary roles of the mother-daughter team that brought us the Indicator - the MBTI. While Isabel was the psychometrician and crusader whose creativity, intelligence, energy and endurance made Type known world wide and APT 14 possible, her mother, Katharine Briggs, was the developer of the theory, the creator of the model. According to Dr. Grant, the Indicator is NOT a measure of Carl Jung's theory of Psychological Type, but of Katharine Briggs' theory. And because Jung's quite similar model has overshadowed that of Katharine and due to a variety of other happenstances, few of us have had an opportunity to fully appreciate the Katharine Briggs theory of human typology. The remainder of Dr. Grant's presentation helped correct that deficiency. He ended with an appeal to the current owners of the MBTI ®instrument to shepherd forth for future generations the "entire instrument" developed by Briggs and Myers and in so doing allow all of us to more completely understand and use the model developed by Katharine Briggs.

What resonated with my type-stereotype hang-up was Dr. Grant's representation that Katharine's model identified 16 paths to " life long development." Perhaps due to influence of Carl Jung, she chose to call these differing paths "types." Grant's point here is that the model is not static nor is it about behavior. It is dynamic and it is about development. This emphasis illustrates the folly of lumping together, in one box as it were, 8 individually different types and attempt to say anything of value about these artificial collections.

We engage in this folly whenever we attempt to make generalized statements about "E's" or "S's" or "F's" etc. Such gross categorizations deny both the unique developmental paths of the types and the dynamically interactive fashion in which the individual preferences act in concert. Such statements are superficial and inevitably stereotypical. They lead us away from appreciating individual gifts and human growth potential.

I now find myself in a bit of a paradox. Now that I am able to express clearly the whats and whys of my discomfort with popular forms of "type talk" I find myself somewhat painted into a corner. If I were still doing Introduction to Type workshops, I wouldn't know what to do because I'd have to throw out most of the material I've used in the past. And I know there also seems to be value in talking about the behavioral components of E/I, S/N, etc. They do speak to some important constellations of human traits (witness the high correlation with the famed or infamous Big Five personality constructs) and do it in a way that emphasizes the positive values of these differences.

Yet if we lead out an Introduction to Type with discussing and illustrating behavioral differences of the four preference pairs, we start down the path of stereotyping. Too many people will naturally focus on the parts rather than the whole. Too many people will naturally combine the parts in an additive way rather than grasping the varied ways the same components can interact and contribute to a unified whole.

Many of the "Experts Panel" of the Closing Plenary Session called for greater efforts to introduce and emphasize Type Dynamics. I hear and appreciate their song. I sense however, they were talking about us developing and promoting the next level of type education - assuming we would script a graduate program in type on top of the existing undergraduate curriculum. I think we have to find a way to incorporate Type Dynamics into the first year undergraduate program. Type when first introduced has to be "introduced" dynamically. No more stereotypes of "E's" versus "I's" and the lot. Right from the beginning folks need to firmly grasp each of us possesses both E&I, S&N, T&F, and J&P. They need to understand that when they think they are 'seeing' a constellation of 2 to 4 of these letters, they are only seeing one side to the person's personality - at that particular moment in time and in those particular circumstances.

In making the above appeal to develop a different way of introducing type, I fear getting mired down in complexity. But I have simple personal solution for that. As I don't do workshops any more, I'll just leave it for someone else to figure out. (In fact a colleague and friend has done just that. Personality Type educators should read Jeanne Marlowe's Presenting Type Dynamically for some worthwhile ideas of a different way to present MBTI workshops.)

By the way, in my personal relationships, I no longer try to guess a person's type or even their type letters. I attempt to follow a pragmatic approach that I understand Judy Allen (Health Care Communication Using Personality Type - see info on it in our MBTI Books page) advocates: speak to whatever preference seems to be operating at the time - while reminding yourself this may not reflect the person's type. In a health care setting, there is great value in this "deal with what is presented" approach versus trying to figure out what is another's type. For stress, anxiety, and a variety of circumstances can cause a person to act differently in a health care setting and thus cloak their normal personality expression. Yet figuring out another's type is damn hard to do anyway so in my book it boils down to knowing thyself, what are my blindspots, and expanding my ability to talk and understand in many different languages of type expression. 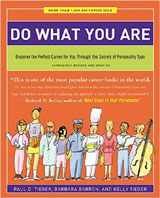 What Color Is Your Parachute? 2016: A Practical Manual for Job-Hunters and Career-Changers